By Jaishree Drepaul-Bruder on 07/19/2019Comments Below 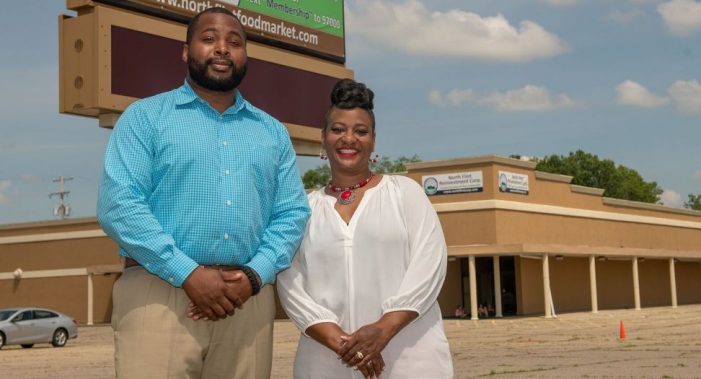 This coming Monday, July 22, Sandra Johnson is going to be at the North Flint Food Market from 5-8:30 p.m., and she’s inviting everyone in her community to join her for a special meeting.

As manager of Hamilton Community Health Network’s Illuminating Community Change (IC2) project, Johnson has been at the forefront of organizing the upcoming IC2 Safety Forum. The theme: Discussing Economic Development for North Flint.

“I have lived in North Flint all my adult life, and I personally can say that I have never heard of such a forum being offered,” Johnson says. “I think that people will find that they will leave with new information, links to resources and hope.”

The Hamilton Community Health Network (HCHN) was awarded a $1 million grant in October 2017 from the U.S. Department of Justice’s Bureau of Justice to help fight crime in the northern most part of Flint. The goal is to revitalize North Flint by identifying and then addressing the root causes of crime like blight, lack of jobs and educational opportunities.

It’s a three-year program and Johnson says that the first year has been mostly focused on research and then next the two years will see the unfolding and implementation of programs. “We’ve established a steering committee, which is a cross section of partnerships. It represents different organizations in the community as well as residents of neighborhood block clubs,” says Johnson.

While IC2 has collaborated with over 30 local community organizations and businesses, their main partners are the University of Michigan School for Public Health, the Flint Police Department and the North Flint Neighborhood Action Council. (HCNH is the lead agency and fiduciary.)

“With the help of our partners and community members, we’ve held focus groups in our target area that that are resident-led and community-based. We’re striving to get first-hand information from residents about what they have experienced and what they need,” Johnson says.

The program has also given residents of North Flint opportunities to bond and empower themselves through three neighborhood clean-ups. Residents have worked together to beautify their areas at these events. Boarding up vacant houses, picking up garbage, and tending to overgrown grass and high shrubs are just a few examples of their efforts.

Johnson also shares that a research team from the University of Michigan School of Public Health and researchers from Michigan State University helped them to understand some of the historical and evidence-based practices that have worked in other communities having similar challenges reducing crime and violence.

Working with the police department was a given since the grant was from the Department of Justice, Johnson says. It is also essential because of resident feedback. “We hope that we can play a part in  rebuilding trust and establishing relationships between the police North Flint residents, because over the years those relationships have declined,” she says. “Police staff declined over the years, so people feel that they are less visible and have concerns about response times. We’ve discovered that one thing that must be done to reduce crime in our target area is working with the police to identify ways to demonstrate to people that they can trust law enforcement again.”

Another thing that IC2 has learned is that a major concern they should be focusing their efforts on is employment. “We will be looking at adult and youth employment programming. Youth in particular need to be given attention because we want to have a sustainability plan in place, and our revitalization efforts need to be long-lasting,” Johnson says. “Opportunities for the reentry population or returning citizens, such as men and women leaving incarceration, is also important.”

Lack of employment and poverty is a root cause of crime, Johnson adds. It is her hope that Monday’s forum will help attendees regain a sense of positive identity and connect them with programming opportunities and resources right in North Flint. “We found that while there is lots of bustle in downtown Flint, we have a lot of local residents who for various reasons – be it health challenges or lack of transportation – can’t make it there,” Johnson says. “We have speakers coming in that will provide information about local, not-so-well known trainings and resources.”

Monday’s meeting will also focus on the need for, and importance of, small business ownership. Johnson doesn’t have an exact number of the small businesses operating in North Flint, but is hoping to get a more accurate count in the near future. “Hopefully, through the forums and other events, we can get an understanding of exactly who is in our community and how we can all work together.”

“The big about thing about the project from the Federal level is that it has to be community-based and place-based,” says Johnson. “So we are taking into consideration opportunities to grow and develop businesses so that we can use some of the empty and vacant land and properties out there as a springboard to revitalize the economic base.”

The metaphor of a springboard comes up again when Johnson talks about measuring current success and what’s in store for the future.

“One million dollars over the course of three years, targeted for one area, in reality doesn’t always feel like as much as it sounds,” she says. “But we are planning to get a lot out it. It’s almost like seed money that we can use to get other organizations involved and that we can use as a springboard for micro grants and other funding – not just for us, but other community organizations – that will ultimately get us to where we want to be as a community.”

The only way to a better community is through community according to Johnson, who is expecting 150 people at the upcoming forum. “The strength of the work we will do in the next two years is rooted in the fact that it is community-based and resident-driven,” she says. “Already we see people who have sat at tables with us for one year, who have poured out their souls and shared information and fears. We’ll continue to sit down down and strategize ways that we can bring about change.