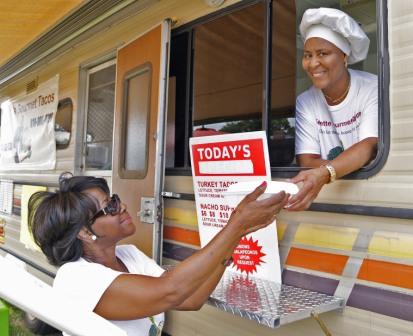 Yevette McClain-Henley realized it was time to change her life when she woke up in the morgue at Hurley Hospital where she’d been pronounced dead on arrival, tagged and covered with a sheet.

She doesn’t remember much about her near-death experience, but she knows she overdosed during an evening of smoking and snorting cocaine at a neighbor’s house. She recalls fighting in a place of darkness and grinding her teeth during her spiritual struggle when she heard God’s voice calling her name before responding: “Huh?” That’s when a hospital employee heard and rescued her.

“I was about to open my eyes in hell,” she says. “God gave me a second chance.”

McClain-Henley, now an evangelist through Powerhouse Ministries in Flint, believes her second chance has come through divinely inspired recipes for the tacos she sells from a RV/food truck parked on a lot she owns on Court Street. The founder of Yevette’s Gourmet Tacos says she was given the recipe for the seasonings, salsa, sauce, even the stir-fried veggies she uses, while she was tending vegetables in a garden.

Customers line up at 3613 E. Court Street for deliciously addictive stir-fried veggies and turkey tacos that offer a unique zest and burst of flavor. She also offers nachos, ice cream tacos, fried elephant ears, and says she has come up with 25 ways to eat tacos, along with menu options to build your own tacos and nachos.

“It’s a God thing,” says the General Motors retiree. “I believe the secret to my success is, when God gave me a second chance, he gave me a second chance for a purpose. My truck is not just a taco truck, it’s a church. I talk to people and give them the word of God. We talk about God when they’re in my presence. I have a gift to discern who needs help or a word, who needs prayer and who needs me to lay hands on them for healing. I minister to them to help them.”

Anne Briggs says meeting McClain-Henley and eating her tacos has changed her, too.

Just about every day the taco truck is open for business from 1 p.m. to 7 p.m. except Sundays and Mondays, Briggs is there – often twice a day. She enjoys the gourmet, stir-fried veggie tacos loaded with kale, cabbage, carrots, zucchini and squash so much that it helped transform her lifestyle and eating habits. Since early May when she first started eating at Yevette’s, she shed 15 pounds.

“They are just so healthy, so refreshing, so good,” says Briggs, a stylist and eyebrow specialist at the Capelli’s Hair Salon next door. “It’s just clean eating. I was like, ‘Wow, something this healthy can taste so good.’ It’s just exciting to me because I’m trying to eat healthier now.”

Briggs says she just can’t get enough of the tacos and introduces her clients to them. Many get tacos before they sit down for hair and eyebrow appointments. One of her clients orders them for her staff and buys at least 30 of the $2 tacos a week, Briggs says.

“It’s just a beautiful experience,” she says of visiting the food truck. “I started eating stir-fried vegetables every day. They melt in your mouth and I just love them. (McClain-Henley) is really a part of the anointed. She has prayed for me and given me encouraging words of wisdom.”

Briggs says the community can’t seem to get enough of the gourmet tacos, either. She recalls hearing one customer, who often comes to buy $60 worth, say, “I don’t know what she’s got in those tacos over here. But she must have comeback in there because that’s what they make me do – come back.”

McClain-Henley says it’s all because she’s doing what God told her to do. She meditates until she gets answers about how she’s supposed to operate her business, create new recipes and provide customer service in her “food ministry.” On deck are plans to use the building on the property to package and bottle seasonings, sauces and salsa.

McClain-Henley’s journey hasn’t been simple. She’s opened, shut down, battled health problems and the health department. She’s had multiple surgeries and still sometimes has complications from two gunshot wounds she survived in the 1980’s. She initially started the business using only an electric hot plate, lawn furniture and a cooler she set up on the side of a beer and wine store on Court Street.

The entire experience has been a miracle, she says.

McClain-Henley calls her food “happy tacos” because they seem to make people feel so good.

“They certainly make me happy,” Briggs says. “They really put a smile on your face and you don’t have to feel guilty later, like you have to get on the treadmill.

“I wish I could go get one right now.”