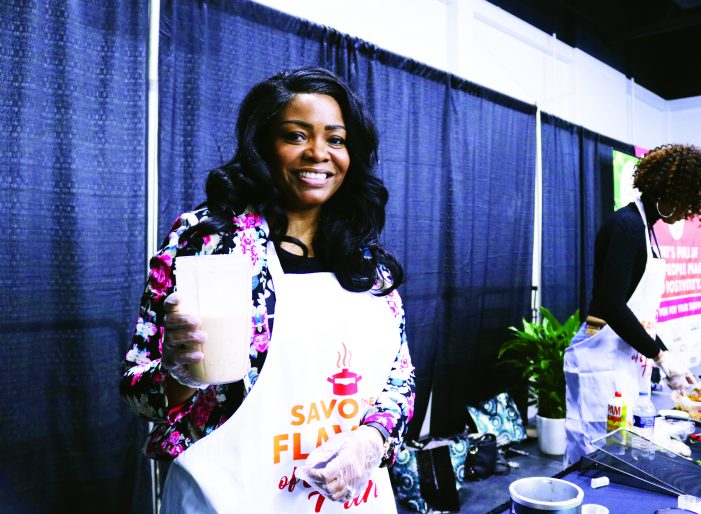 It was Latoya Kelso’s kind of get-together. Kelso was among the 1,200 visitors who munched, mingled and mulled their options for incorporating nutrition into their daily lives, while attending Savor the Flavor of Flint at Dort Federal Credit Union Event Center Jan. 27.

Many enjoyed snacks and samples from 20 Flint restaurants, chefs and home cooks who served-up their recipe favorites prepared with vitamin- and nutrient-packed vegetables, fruits, lean meats, and natural spices. From vegan options to low-fat sweets that registered high in satisfaction, Savor the Flavor of Flint offered a variety of ideas for starting the journey toward wellness.

Presented by the Michigan Fitness Foundation and TheHUB’s parent company, Bridges Communications Group, the celebration of healthier choices was held at a turning point in Kelso’s life.

“I was raised on a traditional American diet,” Kelso says.

But now she’s making the challenging transition to vegan, eating only non-animal products and even restricting herself to alkaline-based meals.

“Heart disease and cancer run in my family,” she says. “So I’m doing everything I can to not travel down that path.”

So far, by changing her diet, Kelso has succeeded in getting her prescribed blood pressure medication reduced to a low dosage. She was excited to attend Savor the Flavor of Flint and get as much information from dozens of health experts, vendors, and program coordinators as possible to help her stay on the right path.

Choices like Kelso’s help inspire the community. The sight of long lines at the event’s numerous restaurant and product tables were evidence she’s not alone in exploring and enjoying benefits of a better lifestyle. In four hours of Savor the Flavor, few of the smoothies, savory dishes, snacks or sweets provided went unsampled, often even drawing repeat visits to sample seconds.

Savor the Flavor was a “game changer and one of the most successful events we have had in Flint from the samples, generational cooking demonstrations, entertainment, great giveaways and energetic emcees,” Sheryl Thompson, deputy director field operations – Mission Flint at Michigan Department of Health and Human Services.

Vendors were happy to welcome the day’s participants and share the inspiration.

“This was wonderful for the community,” says Charma Dompreh, creator of Charma’s Green Chips. “Everything was orchestrated well and the volunteers were gracious.”

Guest Cook Ashley Hamilton was happy to attend the program, calling it “a major success.”

“We’ve had so much positive feedback from all who attended and that is so uplifting to everyone involved,” she says.

Just as important as the event’s theme, Flint native Sean Croudy saw a strong turnout by his friends and neighbors in the city as a positive sign. Not only did many of them learn about places to dine in the city and new health products to purchase, they learned of programs serving families and seniors.

“It’s awesome…” Croudy says. He also cited youth sports including a hockey program and a city basketball league at two locations, all taking place at the same time of Savor the Flavor of Flint.

He sees the combination of community programs stressing nutrition and fitness as a good way to start the year.

“So it’s a nice weekend in the city of Flint,” Croudy says.

Lead photo: April Cook-Hawkins, who supports the ministry of her husband Jeffery Hawkins Sr. at Prince of Peace Missionary Baptist Church, shows off a protein smoothie made from her favorite recipe. Photo by Alvin Brown