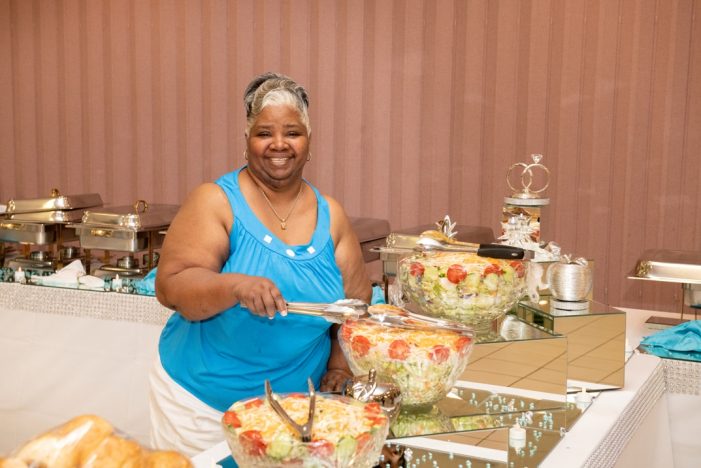 There was a time when Beverly Biggs-Leavy says she “couldn’t boil water,” let alone cook a decent meal.

She left Flint at 18 to live in Detroit, but she wasn’t alone.

“I had a daughter and all I would give her was fast food and cereal,” Biggs-Leavy, 60, says.

As the young mom’s learning curve revealed itself, Biggs-Leavy recognized a need to improve her household skills. Trial-and-error kitchen experiences eventually led her to a career in Flint’s culinary community and the scheduled grand re-opening of one of the city’s most popular soul food restaurants.

“My auntie had a restaurant in Detroit and I would go there every weekend to make her banana pudding,” Biggs-Leavy says.

But along the way, Biggs-Leavy not only mastered her assigned dessert at the restaurant, she perfected other dishes. By the time she and her daughter returned to Flint in the early 1980s, she’d built the foundation for a journey that led to food preparation jobs in cafeterias at Buick City, Nottingham Place, and Mott Community College.

Decades later, the previously unqualified water-boiler is preparing to launch her second soul food eatery, the new and expanded Beverly’s, at 3613 Clio Rd.

“I love to cook. I cook with my eyes closed,” Biggs-Leavy says.

Her skill has become such a passion that she practices it daily, if only for herself and her family.

“I don’t eat leftovers,” she says.

Having discovered and honed her culinary talent, mainly through self-education, Biggs-Leavy yearned to become an entrepreneur.

“I’ve always wanted my own business and when I started in 2012 I didn’t have any money on hand,” she says. “I would just flip my own money. I didn’t borrow any.”

A generous Mothers Day gift from her daughter gave Biggs-Leavy the seed money to open Beverly’s Cakes and Catering at 915 South Dort Highway in Dort Court Plaza. But, while many of her previously satisfied diners agreed she had the skills to pay the bills, business was a little slow. Biggs-Leavy came up with an idea to do some simple, creative marketing.

“I was right next to the foot doctor,” she says. “There was a lot of foot traffic, but I didn’t get any of it.

The problem, she thought, was passersby assumed the restaurant was just a cake shop. So she enlarged some laminated images of lunch and dinner entrees, put them in the window and, surely enough, hungry patrons followed. Turkey and dressing, fish, smothered chicken, salmon patties, macaroni and cheese, collard greens, and desserts like pineapple-coconut cake and peach cobbler filled countless plates.

With most menu items priced at no more than $10, Beverly’s Cakes and Catering grew in popularity to the tune of about $2,500 worth of business on Sundays alone.

But after a strong run, the city’s water crisis hurt the establishment, as it hurt other restaurants. Customers feared illness from lead exposure and Biggs-Leavy was forced to close her doors in 2016. On Tuesdays, another popular day for the restaurant, Beverly’s Cakes and Catering had averaged about $1,000 in revenue, but now Tuesdays brought in little more than pocket money.

“I would stay there all day long, from 10 o’clock in the morning to 8 o’clock at night, and wouldn’t have made more than $20,” says Biggs-Leavy.

“Even though I was buying my water from day one, people just didn’t trust” restaurants anymore, she remembers.

The good news was her support system remained. Even when she couldn’t pay staff, Biggs-Leavy often had her granddaughter, niece, sister, or other family to help operate the business. She says she also got a helping hand from the Detroit Pistons and Huntington Bank through a partnership designed to help businesses hindered by the water crisis.

Biggs-Leavy has kept busy by preparing and catering meals for weddings and other special occasions from her home kitchen. She bought the building that will become her new restaurant, to be renamed Beverly’s, through the Genesee County Land Bank. She plans to open the location this fall. A dining room that will accommodate 80 to 100 people, versus the previous 20-seat dining area, are among the planned features.

“I am very excited. I’m blessed,” Biggs-Leavy says. “Excitement is good, but I’m blessed to be able to do what I’ve done.”

Faithful customers can expect the same flavor and culinary flair that brought them, their families and friends to the original restaurant, she says. Salads, turkey sandwich wraps and healthier fare than what’s offered at many soul food shops will also be available on the menu, Biggs-Leavy adds.

“I make sure that when I put something out on the table, you don’t have to worry about whether it’s right or not,” she says. “You tell me what you want and I’ll make sure it works.”