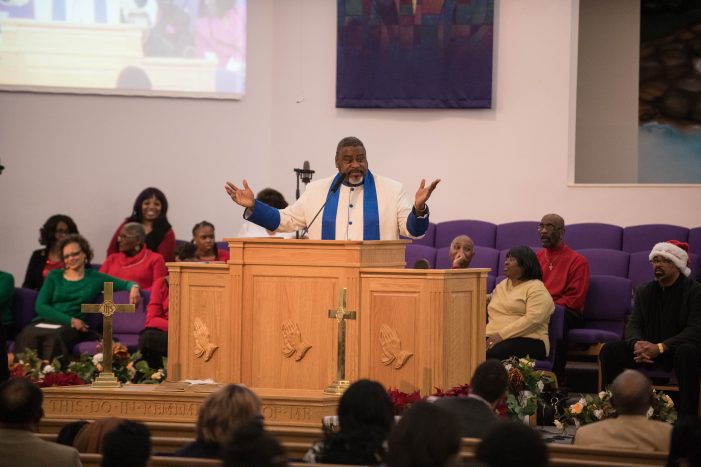 Pastor Kenneth Stewart is driven by an African American proverb, which originated in the ante bellum south during slavery.

“Each one reach one. Each one teach one.”

The idea is for everyone to pull the next one up the ladder.

Originally from Pine Bluff, Ark., that’s the same philosophy Stewart follows as pastor of the House of Prayer in Flint. He believes the best way to reach and teach people is to make God’s word easy to understand.

That is essential for many Flint residents who have difficulty reading and understanding the word because of the high illiteracy rate in the city and county.

More than 60,000 adults in Genesee County read at a first-grade level, according to a study by the Genesee County Literacy Coalition. That constitutes 35 percent of all Flint residents, the study says.

Local churches must adjust to this staggering statistic in terms of how they teach and preach to residents of all ages, Stewart says. He points out a lot of people come to the House of Prayer specifically to hear the Word because it is so easy to understand there.

“One of the things we have a reputation for at House of Prayer is that the Word of God is made so plain here,” he says. “I think that is our greatest strength.”

To help improve the literacy rate and reach and teach more people, the church is starting to build and develop partnerships with local stakeholders to help enhance early childhood education. It also has an educational wing, which is being equipped to host a school or daycare center, and a computer room where computer classes are taught to local youth.

It’s all to make a difference in the lives of Flint residents. However, making that difference has its challenges. One of the biggest issues Stewart says he and other clergy face is getting people with the stamina and determination needed to keep going in the face of adversity to step up to leadership. That is more difficult today because there are fewer people in the churches to take on those roles.

“We often start off with a bang in help ministries in every church, but sometimes don’t have enough strong-willed people who keep going when challenges come.”

When General Motors closed its plants people started leaving Flint, it took a toll on local churches and the number of people available to take on leadership roles. Stewart has had more than 200 people leave the House of Prayer due to relocation in the past few years. Still, despite this mass exodus, he says the House of Prayer has been maintaining well.

“I pray for all of God’s churches that even more people shall step up to the plate to serve,” he says. “We often start off with a bang in help ministries in every church, but sometimes don’t have enough strong-willed people who keep going when challenges come.”

Stewart wants the clergy and elected officials to work together to improve the conditions in the city – in every corner, not just one or two sections.

Another big challenge is too often the pastors’ hands are tied when it comes to taking action on many issues that could transform Flint. Stewart wants the clergy and elected officials to work together to improve the conditions in the city – in every corner, not just one or two sections.

“I pray local city officials will come together and work together more effectively with local pastors for the good of the city,” he says.

While clergy and elected officials must work together, Stewart says every person in Flint must also play a role.

“Make someone else better. Whenever you make others better, you can’t help but make yourselves better,” he says.

That’s one of the reasons Stewart decided to accept the call to pastor at the House of Prayer.

He initially began coming to Flint in 1990 when he came up to preach at a funeral for a family member of his wife, Irma. While in Flint for the funeral, Bishop James Flowers of North Star Ministries invited Stewart to preach for him on a Sunday morning. That evening, Bishop Odis Floyd of New Jerusalem Full Gospel Baptist Church, invited Stewart to preach at his night service, which would be broadcast on the radio.

When he preached, the late Rev. Charlie Thrower, pastor of House of Prayer, was in the audience. Very impressed with Stewart, Thrower invited him to come back to Flint to preach at a revival held at House of Prayer. He did, and from 1990 through 1996 preached annually at revivals held at the church.

When Thrower passed away in December 1996, Stewart found out he had already informed the church leadership if anything happened to him it was his wish they consider Stewart as his replacement. The church had established a trusting relationship with Stewart during the previous six years and asked him to take over as pastor.

It was not an easy choice or transition. Stewart had lived in Pine Bluff his entire life and was uncertain if Flint was where he wanted to be. It took him a little while to make up his mind.

“At first, I was fearful of the change in coming to Flint, but the Lord made it clear to me, through both closed and opened doors, that this was where he wanted me to be,” he says.

He made the decision to come to the church from the Lampkin Chapel Church in Pine Bluff where he had pastored for 11 years.

Stewart certainly didn’t come to Flint seeking economic opportunity. He lost a significant amount of financial resources in accepting the position as he had also been working at Brown’s Funeral Home in Pine Bluff for more than 10 years. Therefore, he lost an entire income when he moved to Flint, but he still felt compelled to come because he felt it was God’s Will.

“I didn’t want to pass up on what God was leading me to do out of concern for money. I knew God would provide,” he says.

God has provided and Stewart says he and the church are committed to making a difference in Flint, not to gain credit or recognition for their work.

“The Bible says that whatever we do secretly, the Lord will reward us openly,” he says. “So, that’s how I go about my business.”