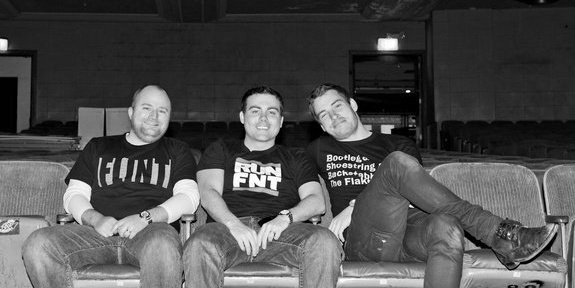 Matt Kipp wasn’t thrilled by a lot of imagery associated with his hometown. One memorable, but unflattering, t-shirt displayed the name “Flint” with a pistol used to symbolize the capital letter “l.”

Reports of violence and other challenges in the city during the past decade had begun inspiring humor represented in bumper stickers and apparel, but Flint itself was often the butt of the joke, Kipp remembers.

“We just noticed there were a lot of t-shirts coming out that were very negative,” he says. 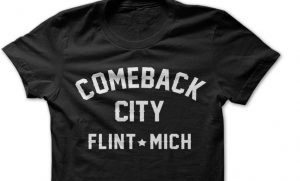 In 2011 Kipp teamed up with Jeff Rice and Jason Shaltz, two former classmates from Carman-Ainsworth High School, to launch Midwest Lint. Projecting a more positive outlook and attitude about Flint, the company sells t-shirts through its website, midwestlint.com.

“People like it and the nice thing is there’s a lot of broad interest,” Kipp says. “Even my dad wears one of the shirts. Detroit has got that hot revival downtown going, but there are still people in Flint who love the city and want to see it doing good.”

Instead of symbols and designs that portray Flint as a place to be survived, rather than celebrated, Midwest Lint showcases t-shirts, hoodies and caps bearing proud phrases like “Comeback City,” “Flint Town” and “Flint ‘Til I Die.” Among hundreds of designs that created during the business’ seven-year run, there are also bits of Flint nostalgia, like the Auto World t-shirt that hearkens back to a concept from the 1980s. There are also nods to sports teams like the Detroit Tigers and recognizable figures like University of Michigan football coach Jim Harbaugh.

“This was more of a fun project, but at the same time, Jason and I were on the phone just last week talking about marketing and it’s funny how we started learning things that apply to our day jobs,” Kipp says.

A cyber-security professional, Kipp is the only partner who remains in the Flint area. He manages business and accounting for Midwest Lint, while Rice, of Sterling Heights, handles social media and most of the art designs. Shaltz, who lives in Brooklyn, manages the company’s marketing.

Kipp says he and Shaltz have known each other since kindergarten, and they shared ideas about one day working together. Along with camaraderie the three men enjoy, they’ve used Midwest Lint to support causes like the Flint Diaper Bank with donations. Shaltz’ father founded Flint Diaper Bank, which supports families by providing children’s diapers at no cost. 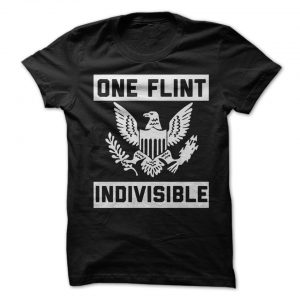 While the partners considered moving into a physical store the online business is serving their professional and personal purposes.

“It’s essentially a side hustle for the three of us to keep us busy and learning” about marketing and sales, Kipp says. “It’s a fun hobby. We’re going to keep doing what we’re doing right now.”

The plan, he adds, is to continue using Midwest Lint to promote hometown pride, as long as there are ideas for entertaining, inspiring and positive images.