By Jaishree Drepaul-Bruder on 02/21/2020Comments Below 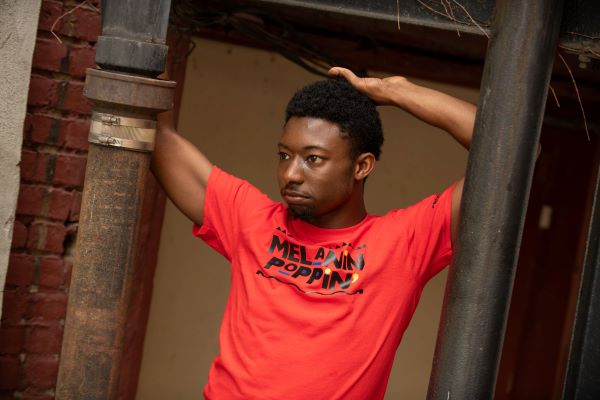 Ask Flint’s Damontai Richard how he would describe himself and there is no hesitation. “I’m a leader,” he says boldly.

It doesn’t take long to realize that indeed the 23-year-old’s response doesn’t stem from cockiness, but a healthy sense of self-awareness. Or, that his proclamation is shared by many of his peers across the city. (He boasts 1,865 followers on Instagram.)

“I think that young people look up to me because I am focused and when I say I’m going to do a thing, it gets done,” Richard says.

Presently, Richard has many irons in the fire, with his end goal being “a celebrity model from Flint living in L.A. and a big-time fashion show producer.”

Also known as ‘Monie Tha Model,’ Richard has hit the runway in at least 20 fashion shows, is a singer-songwriter, a dancer, a promoter for other local businesses and a brand ambassador for Detroit’s Nerdy Gangsta clothing line.

His good looks are paired with brains. Richard graduated from Flint Southwestern Classical Academy in 2015. He went on to pursue business management and general studies at Mott Community College. He’s currently taking a break from his academic life, but remains a part of the school’s esteemed Black Student Union.

While Richard has his hands full, he’s gearing up for a groundbreaking career first. He’ll be presenting the 2020 Fame Fashion Show on March 14 at the Greater Flint Arts Council. It’s a kick-off to celebrate the launch of his new modeling company, Fame Fashion Modeling & Talent Agency.

“I’m really excited, because I’m coming up and I’m featuring Flint designers and models so I’m bringing them up, too,” he says. “It’s the start of a bright future for me and for the others I want to help with my skills.”

Richard may be looking to the future, but he does so with gratitude for the past and everyone who has helped him on his path. Always in the forefront is his grandmother, who passed away in his senior year.

He recalls that he was 15 when she told him to never give up and that one day he would see his name up in lights. “I was really sad and she was giving me advice. It didn’t make sense to me at the time. But now it does,” he says.

Richard adds that they shared that heartfelt moment at the International Gospel Center, the church that he grew up in. “God has been with me all my life. Growing up I was involved in church as a dancer, a singer and an usher. My granddaddy, he’s a pastor and my dad is a minister.”

Right now, he attends United Outreach Ministries. In addition to mentors at Mott, Richard counts his pastor as a force that keeps him centered and positive. “All of them give me hope and encourage me to stay focused and believe in myself,” he says.

His Christian faith and the support of his church has indeed seen Richard through a number of ups and downs. If it wasn’t for them he would not have been able to deal with the shooting deaths of two family members.

“It was my two cousins on my dad’s side. Lil Tony & Lil Lonnie Bell Richard. It affected me so badly. I was very close with them because we all grew up together,” he says. Not one to let an opportunity for growth pass him, Richard rallied through grief and anger and is committed to supporting anti-violence efforts.

The strength he found through his church, and his unwavering faith in God, also played a big role toward healing another devastating life event: when he was 15-years-old he was raped by an uncle.

“It was traumatic, but I stayed prayed up,” Richard reveals. “I sat in church and there were times that I wanted to keep to myself, but I learned to trust in the process.”

Bravely, Richard didn’t keep what happened to him a secret. To help other young people who might be grappling with the same issues, he created a video where he shared that he was assaulted.

“It was really hard, especially being a guy. Society says things like that don’t happen to us or we are weak if we cry,” Richard recalls. “At first people were calling me all kinds of names and I had to just not care about all of that. But, eventually people saw the video and they finally got what happened to me and why.”

There have never been any regrets with being open about the rape because, according to Richard, a strong voice like his is needed to help remove stigma and help other youth move past similar pain. He points to an experience that unfolded not too long ago at a church-related conference for men that he attended.

“I shared my story and then a really young guy that was there said that he had been assaulted, too,” Richard says. “He said that I gave him the courage to know that he wasn’t alone and also he was now going to tell his parents what happened.”

As Richard moves forward he has plans to continue to use his voice to instigate change and healing. Becoming a motivational speaker is something he is setting his sights on. But he knows that he must continue with his winning formula for personal success in order to inspire others. For him, that means he has to walk his talk.

“I can’t waste time with empty words. If I say I am going to do something, I do it. And I notice that kids see that I can actually do a thing, and then they jump in,” he says. “It’s important to be a living example and to be like Nike and just do it.”

Editor’s Note: Richards will be hosting the 2020 Fame Fashion Show on March 14 at the Greater Flint Arts Council. The event is also a kick-off to celebrate the launch of his new modeling company, Fame Fashion Modeling & Talent Agency. To learn more or to purchase tickets, visit the event page.