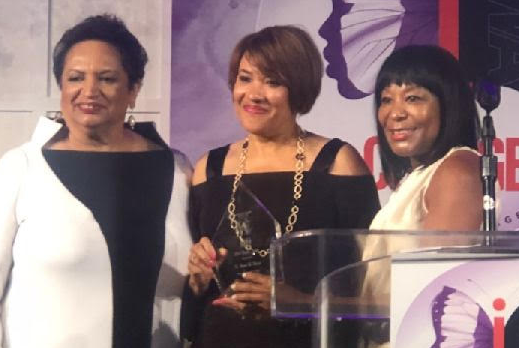 Mayor Karen Weaver is being celebrated for her leadership in the midst of Flint’s most significant public health crisis, but she isn’t resting on her laurels.

Weaver recently attended the yearly Congressional Black Caucus Conference in Washington, D.C. where she received the Black Women’s Agenda, Inc.’s Health Award. She also was recently named a member of the Governing Institute’s Women in Government Leadership Class of 2019.

Weaver will travel to Phoenix in October to be honored by the National Coalition of 100 Black Women Inc.

But despite the mayor’s accolades the city was again reminded of its challenges this week when, for the second consecutive year, U.S. Census research identified Flint as the most impoverished city of its population size.

Still, the number of residents living in poverty, and an economy that hasn’t yet fully recovered from disinvestment and jobs lost since the water emergency, tell just part of the story, a city spokesperson says. Candace Mushatt describes Weaver’s award in Washington and other recent recognition as symbolic of the mayor’s ongoing advocacy, and determination shared by other city officials.

Flint residents’ income levels might be lacking, but Weaver has been taking measures, like advocating to expand Medicaid, which helps benefit many residents.

Another long-term benefit to the city will be the initiatives led by economic development director Roderick Miller, Mushatt says.

“We hadn’t had an economic development director in 14 years. Now we have a department,” she says.

“We do understand that economic development is one of those things that you need to help a city come out of poverty.”

Mushatt says Weaver’s administration has also helped create local jobs and business opportunities, some of which Weaver will discuss at the “State of the City” address Oct. 18 at the Capitol Theatre.

While Flint’s economy remains a challenge, local crime is decreasing, city data shows. Numerous programs are helping. For example, recently, the U.S. Department of Housing and Urban Development awarded $250,000 to the Flint Housing Commission to put cameras in neighborhoods where crimes rates are high. The security cameras will be monitored by the Flint Police Department.

Flint’s previous years of designation as one of the nation’s most violent communities should eventually become distant memories as other advances and improvements Flint continue, leaders say.

A recent $30 million HUD grant to relocate residents of the Atherton East public housing complex, was also good news for the city.

Programs like Get Fit Flint, which promotes low-cost ways residents can stay active and combat obesity, encourage health and wellness while offering options to engage with other members of the community. The 2018 Flint Olympian Games this summer also continued an annual tradition for youth, who competed throughout the city in dozens of sporting events and physical skills challenges. The mayor endorsed the popular event.

“We’re really trying to look at Flint from a holistic point of view,” Mushatt says.

So, in spite of national media reports that occasionally suggest otherwise, Mushatt says citizens should know the mayor and other leaders are making progress on Flint’s behalf.

“When these stories come out, it’s not that we are not aware of the pre-existing issues, and it’s not that she’s just focused on the water crisis,” adds Mushatt.

Weaver echoes similar sentiments to Mushatt’s in comments during her award acceptance speech at the Congressional Black Caucus Conference.

“As I stand here with great humility, accepting this honor, I still need to use my voice for Flint, and the many other cities around this country with infrastructure issues – as well as the many faces and places who are still waiting for fair and favorable access to services and care that should be an automatic and moral right without a crisis attached,” she says.