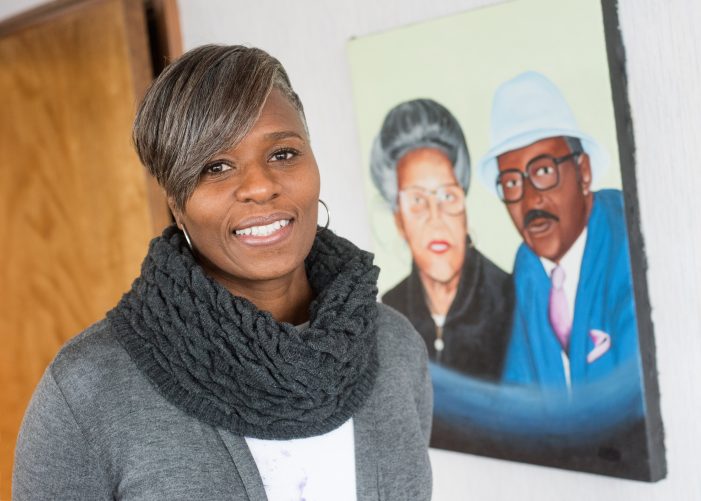 For Rhonda Grayer, building a better Flint  has been a family affair.

The vice president of W.T. Stevens Construction leads a competitive contracting company, named for her father, at a pivotal moment in the community.

While many local businesses call on construction experts to help remodel and literally re-create their images, the very infrastructure of Flint is being refashioned in an area crucial to households and future residents of the city. Guided by Grayer’s family, W.T. Stevens has the key role of helping replace water lines in the wake of lead contamination from which much of the community is still recovering.

“This is the biggest project we’ve done,” Grayer says.

Lead and galvanized steel service lines to hundreds of homes were replaced last year, to stop toxins from seeping into tap water. About 750 homes were slated for service, courtesy of W.T. Stevens Construction and Goyette Mechanical, following the Michigan Legislature’s approval of $25 million to fund the effort. W.T. Stevens is responsible for addresses in Wards 3, 4, 8 and 9. A state-certified lead-abatement contractor, the company began water service line replacement in 2016 after Flint City Council approved the work considered vital to public health.

“I will tell you that it is really exciting  and the most important part of it is the  opportunity to employ people who may  not have had other opportunities.”    – Rhonda Grayer, Vice President,  W.T. Stevens Construction

In total, an estimated 5,000 households will be impacted by the replacements.

While she appreciates the significance of the project to the larger city, Grayer is equally glad for the jobs it has helped W.T. Stevens Construction provide.

“I will tell you that it is really exciting and the most important part of it is the opportunity to employ people who may not have had other opportunities,” Grayer says.

The company has hired about 20 staff, ranging from clerical and general laborers to plumbers and machine operators. There is also video staff, Grayer says, to film the piping being replaced and document its condition.

Among the added personnel are ex-offenders and youth, two segments of Flint’s population the company recognizes for unique training and experience needs.

Creating opportunities is one of the professional examples set by the company’s founder, long-time businessman W.T. Stevens. Known for mentoring in the north end, where the company remains, Grayer says her father’s imprint extended beyond the concrete demolition and excavation work, or the asphalt repair and replacement for which he gained a reputation.

“He trained many people,” adds Grayer.

When Stevens died in 2002, Grayer and her seven siblings wanted to preserve his professional legacy. He’d operated as a sole proprietor, and most of the family members were involved with their own careers. But Grayer, who’d handled her father’s bookkeeping, took up the cause of helping expand the company. Today, she supervises operations, with the water service line replacement among ongoing assignments.

“He really always wanted someone to step in and take over,” she recalls. “We were all there to help him as needed, but we had gone in different directions.”

The company incorporated in April 2002, eventually moving into the areas of health and safety, quality control and more. Along with lead abatement, W.T. Stevens Construction specializes in construction and construction management, design, residential remodeling, demolition, roofing, plumbing, electrical and other skills.

While Grayer is a role model for many women in a male-dominant industry, her father’s three decades of construction experience runs through the professional DNA she and her family share. Stevens’ dedication to the craft provided an example that gives the team an industry advantage.

Particularly for the service line replacement, Flint’s most valuable players are needed at a high performance level. Recent research shows the overall quality of the city’s water has improved, with some lead measurements dropping by as much as 80 percent, according to samples taken between 2015 and 2016. Still, close monitoring of the supply and adhering to anti-corrosion measures are among steps recommended for a complete recovery. Through research supported by the National Institutes of Health, Wayne State University students have been recruited to test water in homes before and after pipe replacement. The overall plan is part of Mayor Karen Weaver’s FAST Start campaign, which puts companies like W.T. Stevens in the rare professional position to help alter the course of a city’s history.

Notwithstanding the status and visibility of the project, the company sees it as just one part of the proud legacy their father began. Grayer and her siblings are happy they’ve taken up Stevens’ mantle for 15 years.

“Now, it is definitely a family business. We all do something,” she adds. “I think he would be very, very proud of where we are at this time.”