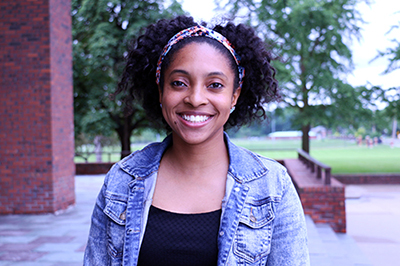 For Chelsea Reeves her Kettering University co-op experience wasn’t just about growing professionally but learning what it means to give back to the community.

Her time at Kettering opened up many opportunities to volunteer in Flint through the National Society of Black Engineers and Kagle Leadership Initiatives. It was those experiences that led her to find a co-op that allowed her to deepen her impact on the Flint community. After volunteering with Communities First, Inc., a nonprofit community development corporation in Flint, she eventually started a co-op there.

“People don’t realize that they have a voice,” says Reeves an industrial engineering major. “When you find the different resources or the differing ways to help them be heard, I really enjoy that.

“Working on my thesis and being able to be an advocate for people experiencing homelessness is important. I think people need to walk in someone else’s shoes at one time or another. This is a way to do that and give back to those who may not be as fortunate as you are. And it makes you feel good about yourself and take pride what you can do for your community,” she says.

Reeves was previously a co-op student at an automotive supplier and thought she would stay in the automotive, but things changed when she had the chance to apply her engineering knowledge to social issues. When the unique opportunity came to work with Communities First in a deeper way, it was something she couldn’t turn down.

Here’s a quick look at what Communities First does.

When Reeves was back home in Southfield she volunteered with the Boys and Girls Club and at a local food bank. She carried that passion for service to Flint where it grew even more, volunteering at the Food Bank of Eastern Michigan, Flint Children’s Museum and at Service Saturdays with Kettering, on top of working with Communities First.

“Being able to see the people that benefit from what I do behind the scenes is really humbling. I really appreciate that,” she says. “Flint is so close. Once you know one person, you know everyone. Kettering’s focus on community service was my initiative to keep my volunteering going.

“So many times we take small things for granted and don’t even realize it. It has humbled me a lot volunteering and seeing people in different ways of life.”

Reeves, who has a business and statistics minor, initially underestimated how her co-op with Communities First would help her with her career. As time went on, she learned that the experience taught her empathy, people skills and event management, among many other things.

“I like the way they give back to families in the community and they bring the families together in different and unique ways,” she says. “I really want to work for Disney. That is the ultimate goal.

“I love that they bring families together. It is a very enjoyable experience. I love the family atmosphere. I like to advocate for people. That’s one thing I’ve learned at Kettering and my co-op.”

Being a Kettering student means a lot to Reeves. It’s a point of pride and inspiration. She will be the first of her siblings to graduate from college, and it’s a journey she never regrets.

Reeves first came to Kettering during the AIM (Academically Interested Minds) summer program in 2011. That’s when she realized she could go to school and work with her hands, something that really spoke to her. She hopes her next step after Kettering will be graduate school to pursue a degree in business.

“This is a big thing for my family. I had to have a lot of patience and I learned a lot about myself during my time being here,” she says. “Kettering allowed me to advance my professional career as soon as I became a student. It was a big deal for me.”