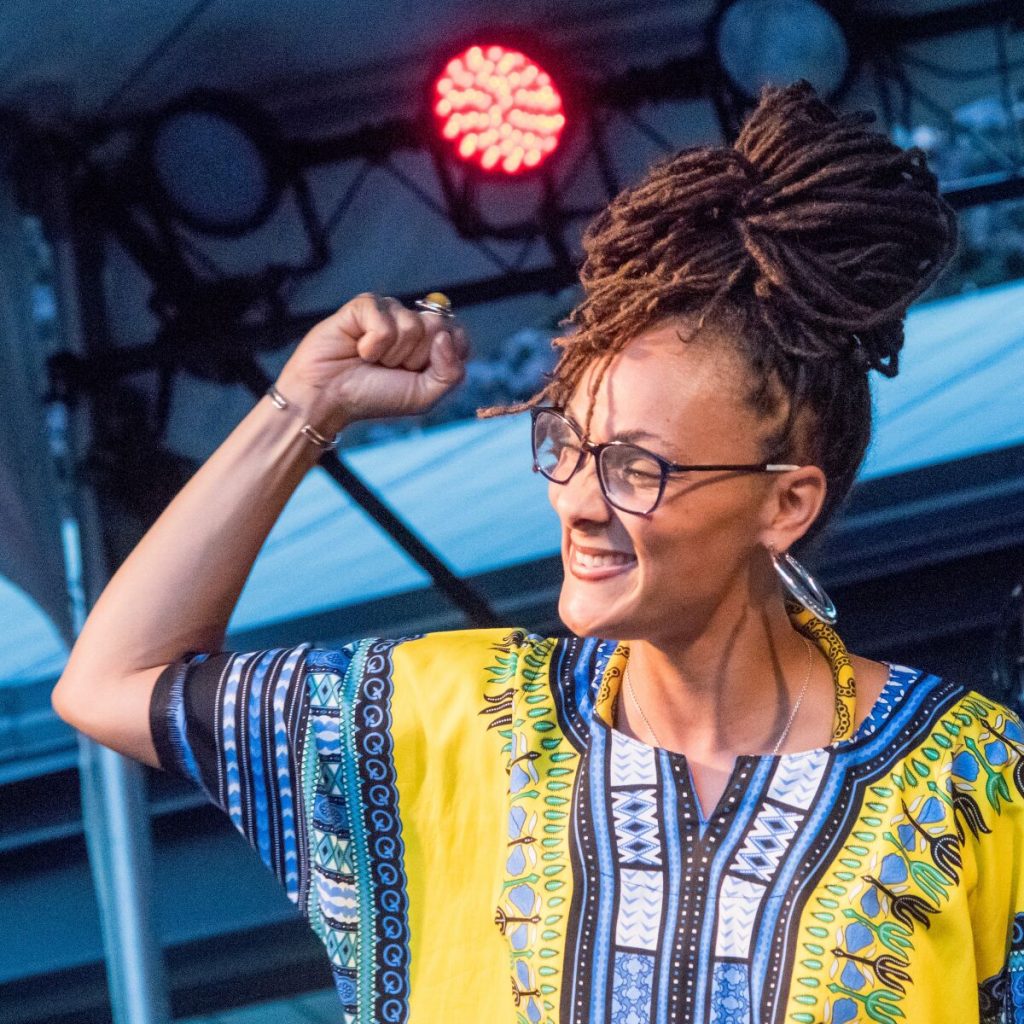 In fact, there were cloudy days for Mama Sol, the Flint-based rap artist and poet whose name translates in Spanish to “sun.”

While in New York working in the ad division of a major urban fashion company, she fell in with a rough social crowd and was grazed by a bullet. During a trip home to Michigan in the late 1990s she felt what she thought was a strange scarring around the chest wound, but she was wrong.

She had breast cancer.

It was a winding road that led Mama Sol to what she calls “self-awareness and cultural awareness,” a road she’s glad she traveled. Today she is known for the positive energy and inspiring messages she spreads throughout her hometown, whether on the stage or out in the community.

“I always felt like my writing and my ability to use words could convey a powerful message,” says Sol, whose middle name is the only one she publicly uses.

Following her diagnosis she underwent operations and used holistic medicine, leaving her cancer-free. But in the process of recovering, she gave up a $70,000- a-year job and was forced to regroup.

Sol moved to Detroit, working for five years as director of special education and lead teacher at an African-centered academy where female staffers were addressed as “Mama” and male staffers as “Baba” (father). She wrote poetry and began an introspective period of growth.

In 2005 she gave birth to her son and had to leave the school because its demands competed for her time beyond the traditional work schedule. So it was back home to Flint, where Sol began living in her mother’s basement. Destiny would be revealed when she crossed paths with an old neighborhood friend who helped re-ignite her earlier love of writing lyrics and performing.

“I was willing to sacrifice for what I really, really desired and felt I was supposed to do,” she recalls.

Soon Sol formed a band and put her energies into everything from self-marketing to booking her own shows, developing a following. Since the early days, she has released multiple collections of music, including this summer’s Go OFF (Only Flint Features).

Sol has also performed around Flint, at high-profile events like Detroit’s African World Festival and shared the same stage as top-selling recording artists like Destiny’s Child, CeeLo, and George Clinton.

Sol’s annual “Happy Feelings” concert, which features her band New Under the Sun and a host of other special guest performers, is a highly anticipated event among her Flint fans.

“The purpose of the concert was to create some happy feelings in the city,” Sol says. “Everybody was so down on Flint. Everybody was complaining, saying, ‘I need to move.’ The mood was just dark, and that’s not me.

“I said, ‘Maybe I need to bring some of my (performer) friends together.’”

The Flint Institute of Arts has played host to the show for the past few years, including July’s sold-out performance.

“It’s a wonderful opportunity to have someone like Sol come in here and bring such a positive message,” says Natalia Lafuente, events coordinator for the Flint Institute of Arts. “It’s about keeping the community uplifted. We just love that positive message that she brings, the looks on people’s faces, how they’re enjoying themselves.”

Born and raised in Flint, Sol spent time with her father in Ohio after her parents separated, but she claims only one hometown. Calling out blight and the need for community healing in her music, she’s also made an imprint at special events like last year’s “Flint Healing Stories on Racial Equity,” one of four Michigan programs in communities chosen by Michigan Roundtable for Diversity and Inclusion.

Her face and her music have also helped brand the city, where Sol has served as spokesperson for Flint Farmers’ Market and recorded a special Crim Fitness Foundation anniversary song. She’ll also be featured in a Flint Forward campaign spot she recorded last month. A sampling of her monologue includes the declaration that the city will advance “with not just a step, but a powerful stomp that will be heard around the world.”

Doubling as an activist and motivational speaker at schools and forums, Sol is consistent in her main goal, musically and otherwise.

“I try to just be the neighborhood hope-dealer,” she says.