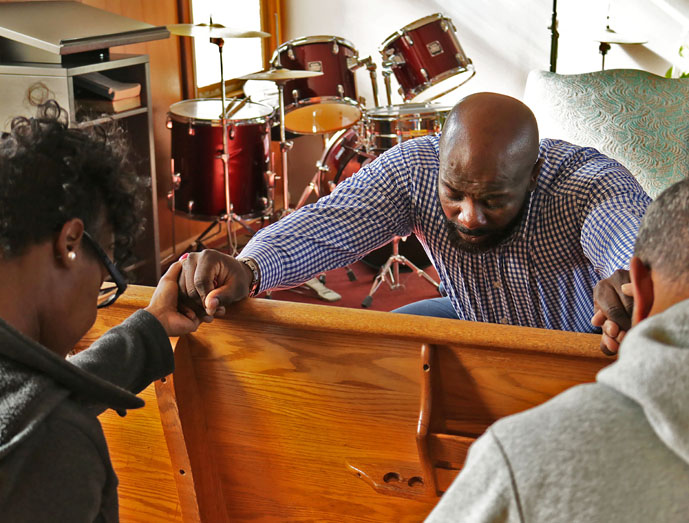 Pastor Jeff Hawkins, of Prince of Peace Missionary Baptist Church never imagined he would one day grow up and become a pastor

In fact, he says being a moral leader was the furthest thing from his mind as a young person. Nevertheless, he always felt his life would somehow amount to something special.

“Even as a small boy I noticed there was a big difference between me and those around me as it relates to how I viewed people and the things people did,” he says.

Hawkins didn’t know what it meant to feel like he didn’t fit in. He just knew something unique was going to become of his life.

There was no way he could have ever predicted the trials and tribulations that would later help him discover who and what he was destined to become.

These unfathomable experiences brought him face-to-face with a crisis of belief, which radically changed his life and continues to impact him daily.

“It’s a loss that nothing will ever be able to replace. It is something you deal with on a regular basis,” he says.

The revelation of God became an entirely new reality through unthinkable suffering for Hawkins, yet not without hurdles. He began to question God.

Romans 8:28 says, “And we know that all things work together for good to them that love God, to them who are the called according to his purpose.”

Hawkins found himself doubting this could be possible.

“I found myself telling God I couldn’t see how the loss of my sons could work out for my good,” he says. “It was a tremendous struggle to go forward and continue to be an encouragement to others”.

Hawkins believes the extreme blight growing exponentially in the inner city is negatively impacting the mental and emotional wellness of many residents.

It was by faith in God through Jesus Christ that Hawkins turned a tragedy into an opportunity.

“We often tend to blame God when we suffer tragedy, but God doesn’t make mistakes,” he says. “People do.”

God not only worked things out to the good for Hawkins, but also to benefit of communities across the nation and in Flint. He regularly travels across the country speaking to vast audiences, sharing his personal testimony and encouraging others who have lost loved ones to violent crimes.

At home in Flint he is helping find solutions to many of the challenges the city and its residents face.

To promote trust between local law enforcement and private citizens, he has provided diversity training to the staff at the Genesee County Sheriff’s Department for the past two years. The training is intended to mitigate the bias sometimes present when law enforcement lacks cultural awareness when placed in an environment different from their own.

“I have found the diversity training to be very effective so much so that the Michigan State Police are interested in adapting the program into their staff training,” Hawkins says.

He is also a leading voice in appealing to local clergy and local community leaders to rally around the call for unity.

Pastor Jeff Hawkins felt a calling to do something special with his life from the time he was a teenager.

In 1971 the late legendary actor and social activist, Ossie Davis, told the 13 founding members at the inaugural banquet of the Congressional Black Caucus, “We don’t need any more rap. We need a map.”

That is precisely the message that Hawkins has for local leadership. He says they must begin to move beyond dialogue, panels and meetings to discuss the problem and bring real solutions to the table.

Hawkins is leading by example and is doing all he can to give residents what he calls a “hand up.”

His church, Prince of Peace Missionary Baptist Church, provides many services including preparation for GED testing, programming, computer training and tutoring. The church also offers a Breakfast Ministry, which not only gives residents a free meal, but helps them start their day.

“You can be much more effective looking for a job on a full stomach,” Hawkins says.

He is also leading a collaborative effort to revitalize Stevenson Square, the neighborhood where the church is located. He envisions Stevenson Square becoming a hub that meets a great majority of the needs of residents, including a library.

While that transformation will certainly help his church’s neighborhood there is much more to do in Flint. Hawkins believes the extreme blight growing exponentially in the inner city is negatively impacting the mental and emotional wellness of many residents.

The same is true for the water crisis.

“It is important to understand the mental and emotional issues that can come about when local citizens continue to carry the burden of not having access to clean water for themselves and their children,” he says.

Besides sharing the gospel with whoever will receive it, Hawkins is also encouraging his congregation and Flint residents to exercise healthy eating choices and to use their minds to the best of their ability to overcome any obstacles.

Above all he wants his congregation and Flint residents to “help yourself by helping someone else.”

Editor’s Note: Stacy Swimp is the Special Projects Coordinator and a Columnist for TheHUB Flint. His commentaries have appeared in the Washington Times, the Miami Times, the Orlando Sun, the Philadelphia Tribune and the Buffalo Criterion. He has appeared as a guest on the Fox News Channel, Sirius Satellite Radio, 50,000-watt radio stations such as WHO-Des Moines and KDKA-Pittsburgh, black media such as WVON-Chicago and Lee Bailey’s EURweb, in addition to the Westwood One radio network. You may contact him at stacy@stacyswimp.org.

Help, Healing and Discovery: Pastor Jeff Hawkins shepherds a congregation of givers  added by Stacy Swimp on 11/08/2017
View all posts by Stacy Swimp →