It’s eye candy for a cause.

The Society of Firefighters has resumed a philanthropic tradition in Flint this year, publishing its first calendar in seven years. 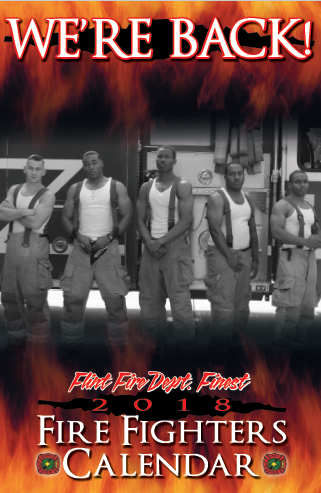 EMS Coordinator Carrie Edwards, sergeant of fire prevention, helped resurrect the calendar, which hadn’t been published since 2011. She photographed and edited the collection.

“What’s special about 2018 is that every firefighter that wanted to participate was used,” Edwards says. “These guys have a heart for service. I didn’t have to pull any arms or legs to get them involved.”

Among the models are Edwards’ sons, Lawrence and Daniel, who represent the months April and September.

The firefighters calendar dates to the late-’70s and early ’80s, but had become a less frequent Flint tradition in recent years.

“We have a new mayor and we have new chief, and they’re supportive of the community,” Edwards says. “They allowed us the freedom to do this project with their support.”

Not only does Flint Fire Department Chief Raymond Barton support the fundraiser, he appears as December’s beefcake, in front of the newly reopened Fire Station No. 8 at 202 East Atherton Road. The firehouse had been out of operation until the city approved its use, and the Society of Firefighters secured federal safety grant funds to help staff the station.

Other significant locations in the community, including the waterfront and the landmark Flint archway, serve as backdrops for the calendar’s subjects.

“We’re proud of the city. There’s a lot going on here and we wanted to make sure we highlighted that,” Edwards says.

The 2018 calendar has been well-received, so far, but it’s important the funds it generates hit their target, adds Edwards.

Even though the scholarship isn’t based exclusively on financial need and can be used for expenses associated with entering or having already enrolled in school, applicants haven’t always shown interest. Expectant high school graduates and even “super seniors,” students in the early stages of college, are eligible as long as they reside in metropolitan Flint

“We would like to give preference and priority to Flint students,” Edwards says. “We just need to get them to apply

An additional donation of $100 to $200 is given each scholarship winner.

To boost interest and promote the 2018 calendar, on sale for $10, the Society of Firefighters will hold a “Firefighters Calendar Reception” at 1:30 p.m. Monday, Jan. 29 at Fire Station Monday No. 1, 310 East Fifth Street. All of the calendar models are scheduled to appear.

Calendars may be purchased on site or by request through e-mail at societyoffirefighters@gmail.com. Edwards may also be contacted at (810) 893-1167 to arrange purchases

For those who like their beefcake raw, Edwards guarantees the 2018 images are genuine, true-to-life reflections of the men who help protect and serve Flint. No artistic tricks were used to help light the fire of anyone gazing at these manly models

“There’s no touch-ups of anything,” Edwards says. “What you see is what you get.”

Flint firefighters light a flame as 2018 calendar models to raise dollars for scholarships for students added by E.B. Allen on 01/16/2018
View all posts by E.B. Allen →