The Diplomat Difference: Hometown company makes the community a priority 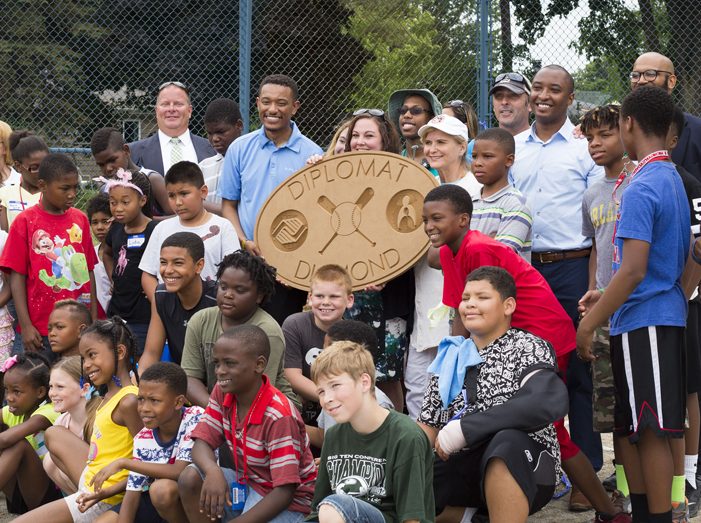 But, at Diplomat, philanthropic and neighborhood investment are part of a broader mission beyond filling prescriptions. As Diplomat’s manager of corporate social responsibility, Adrian Walker and his colleagues regard community wellness as a mandate, and they take it seriously.

That’s why the company focuses as much on helping its customers stick to prescribed treatments and supports finding third party reimbursement and funding support for medications, as it does in fulfilling orders.

Walker and the Diplomat team want the fellows and other visitors to see the warmth and character that personifies Flint, so they’ve begun exploring a beautification strategy to help improve the South Saginaw corridor outside its corporate offices.

Licensed in 50 states, the Flint-based company, with headquarters at the former General Motors Tech Center, has 28 locations nationwide, but it treats its hometown with a unique brand of care. As a specialty pharmacy dedicated to treatment support of chronic conditions like HIV, cancer and Crohn’s Disease, Diplomat’s also concerned about conditions impacting the general livelihood and surroundings of residents, says Walker, a Flint native who came to the company to make a difference.

“Giving back is entrenched in our company,” he says. “Our philosophy is, ‘Take good care of patients and the rest will fall into place.’”

Walker speaks from his personal experience with giving back.

After graduating from Michigan State, he worked in Washington on Sen. Debbie Stabenow’s staff. But, while he “loved” Capitol Hill, Walker says he felt a pull to return to Flint and contribute his gifts to the people and places that nurtured him. His journey home resembles the path of Diplomat, which became a public company in 2014, while retaining a sense of personal commitment to its neighbors in the community that helped it thrive. He and his Diplomat colleagues are happy the company’s environment allows them to participate in additional work that contributes to Flint and its people.

“Employees are definitely interested,” says Walker. “I can’t tell you how many times employees have approached us about getting involved in community projects.”

Employees and even non-Diplomat patients are considered in the company’s three-pillar guidelines of operating as a pharmacy and corporate citizen. The three pillars are: better care, including outreach and education around health conditions and diseases; better communities, stressing improved neighborhood infrastructure and support of “pro-social spaces” that emerge from Diplomat’s efforts; and better lives, promoting healthy activities, like Diplomat’s co-sponsorship of The Crim Festival of Races training program.

“I think we are pretty unique to the space within the Flint scope,” Walker says.

The practice of extending initiatives outside the traditional corporate community interests, results largely from the views of founder Dale Hagerman, Walker says. Having started Diplomat in 1975 as a family-owned company, Hagerman’s vision is advanced today by his son Phil, who co-founded The Hagerman Foundation with his wife, Jocelyn Hagerman. Along with creating the inspiring #FlintFwd social media campaign, the foundation supports non-profits that celebrate the arts and youth development.

When Diplomat staff saw the empty, overgrown baseball field at the Boys and Girls Club Averill Avenue facility, the company jumped in to donate resources that made it an asset for youth. The Diplomat Diamond baseball field was dedicated in 2016.

Walker sees inspiration for future professionals as equally important to investing in youth.

Another active extension of the company’s vision for social responsibility is the current 11-week fellowship inviting college students to bring their talents and energy to Flint and work in areas informed by their academic and career interests. Fellows will come to the city from campuses as geographically distant and demographically diverse as Michigan State University, Georgetown, and University of California, Berkeley.

The program is designed to help further the narrative of Flint’s ongoing economic reinvention, while helping dispel myths about the community following national publicity about its water crisis, Walker says.

“At the end of those 11 weeks we want them to go away with a different perception of Flint, but also, we want to retain that talent,” he adds. “At the end of the day, what better place is there to go and be a part of change than Flint?”

Walker and the Diplomat team want the fellows and other visitors to see the warmth and character that personifies Flint, so they’ve begun exploring a beautification strategy to help improve the South Saginaw corridor outside its corporate offices. The beautification effort could involve a landscaping program for youth, along with art and public murals.

Yet, even with a passion for Flint shared by leadership and staff alike, Walker says a greater collaboration is needed.

“Even though we understand that we’re unique, especially through the specialty healthcare lens, we are not the end-all be-all,” he says. “It will take everyone in this community, all the stakeholders, to move the community forward.”

Editor’s Note: To learn more about Diplomat visit https://diplomat.is  Visit FlintFwd and witness the movement that is moving the city forward. 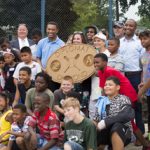 Lead photo: Diplomat works to immerse itself with Flint residents through philanthropic efforts like its transformation of the baseball field at the Boys and Girls Club Averill Avenue location, christened the “Diplomat Diamond.” Photo courtesy of Diplomat

The Diplomat Difference: Hometown company makes the community a priority added by E.B. Allen on 07/25/2017
View all posts by E.B. Allen →