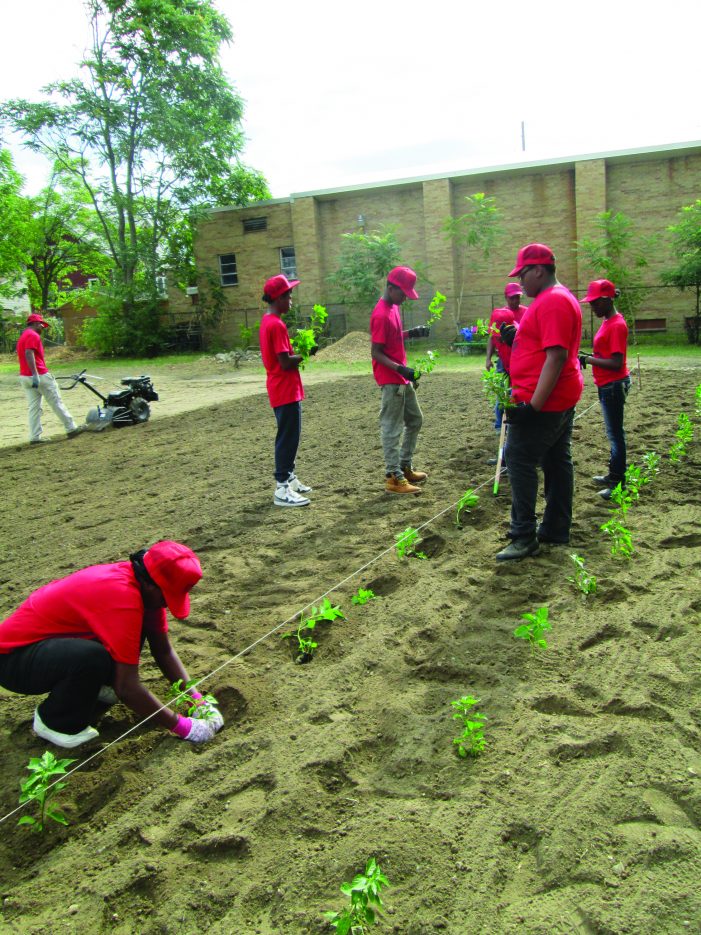 It’s hard to believe, but there was a time when Greg Gaines didn’t know a green from a weed.

That was long before he became farmer-in-chief of Catholic Charities’ award-winning gardening and mentoring program for at-risk youth, where he’s spent more than a quarter of a century helping Flint-area teens learn how to find and keep a job. Gaines has become such an iconic figure in the program that it underwent a name change this past summer, to honor his dedication to transforming the lives of young people. What used to be called the Mr. Rogers Summer Gardening Program is now officially renamed the Mr. Gaines Gardening PLUS Program (the “PLUS” stands for People Learning Useful Stuff).

Gaines has been program director for the Flint-area garden program since 1990 when it began with young men who were at risk for academic failure. Today the program includes young women, too.

“It just grew and grew and grew, well beyond my expectations. These kids have become a part of me and a part of my life,” says Gaines, 68, during a recent meeting at Catholic Charities of Shiawassee and Genesee Counties. “I turned the job down three times, at first. But if God’s got a plan for you, you’re gonna do it, whether you want to or not.”

The new name isn’t the only exciting change this past year. The program expanded to a new location on Flint’s north side next to the North End Soup Kitchen. What was once a vacant lot is now gardens tended by Flint area teens during the summer.

Under the umbrella of Catholic Charities and with Gaines’ steady hand, the program provides paid summer jobs and mentorship for high school students, while teaching them job skills, team work and work ethic. The youth can’t be afraid to get their hands dirty – they plant, harvest and sell produce grown in the Flint area. They also make fresh produce available to area seniors, who often struggle with access to fresh foods.

Not only does the program change the lives of young people, Gaines himself has seen a transformation. He retired in 2004 from Flint Metal Fab after spending 38 years in management. Fast-forward to 2015 when he was presented the “Farmer of the Year” award from Michigan Food and Farming Systems.

This past year, the program included 68 students who were paid $8.50 an hour – much more than the $1.25 they were paid in the program’s first year. The youth leave the 12-week program with skills needed to obtain a variety of entry-level jobs, and the ability to cook a meal for their families. In addition to timeliness and communication, they learn money-handling, salesmanship and food preparation – knowledge that could be applicable in a variety of careers.

This past year, expanding the program to grow gardens on vacant land that used to support houses wasn’t easy, Gaines says. They had to contend with buried foundations, thick roots and installing an irrigation system, but in the end they had a beautiful landscape that fed the surrounding community, Gaines adds. Neighbors were personally invited to take whatever they wanted to eat from the garden, which grew tomatoes, squash, green beans, cabbage, onions, potatoes, zucchini and peppers.

The youth program started in 1988 in Saginaw, under its original namesake, founder Wendell Rogers, who worked for the Michigan Department of Corrections at the time. It merged with Catholic Charities in 2006. Today, program alumni are scattered across the country. Some go on to related careers in horticulture or farming. Others go a different way – but the lessons from Mr. Gaines and staff still apply.

Nicky Edwards, 23, is a Flint police officer who credits Mr. Gaines with instilling in him the desire to do community service.

“He didn’t even know us but he believed in us,” says Edwards, who went through the program in 2011. “I thank him for all he has poured into us from the beginning.”

Edwards fondly recalls the “Mr. Rogers Pledge,” named for its founder, which the students would recite each morning before getting down to business. The self-affirming verse is now called the “Mr. Gaines Pledge.”

Edwards still revisits the pledge from time to time when he feels low. It helped him through tough times, he says, just like the program kept him out of trouble.

Rahshemeer Neal, a Lansing firefighter who went through the program when he was 14, says it was the foundation for him to become the hard worker he is today. Every day, mentors drilled into the participants the importance of education, workplace safety and how to find and keep a job, he says.

“You guys can make it, too,” he told current students at the annual dinner. “Don’t be a product of your environment. …I don’t like that excuse. Because I know if I can make it out, you can.” It’s not always easy. Neal described getting up at 5:30 a.m. and walking to work in the chilly morning hours. Then, by about 10 a.m., tending the gardens got to be hot, sweaty work.

Still, many say the program is rewarding. The youth in this year’s program who were asked to reflect on the experience were thankful for the opportunity. “Words can’t even explain how much the program has meant to me,” wrote Jasmine Humphries in a testimonial. “I know I’m not the easiest person to work, or get along with, but I am very thankful for the opportunity to have worked with this program for two years.”

Historically, the program has received financial support from a variety of sources. This past year, it included $80,000 from the Flint & Genesee Chamber of Commerce Summer Youth Initiative. It was also awarded a $60,000 grant from the Ruth Mott Foundation with a $40,000 fundraising match.

Flint resident Omari Byron, 19, first went through the program in 2012 before working his way up to being a youth supervisor. It gave him the skills he needed for his job as a seasonal horticulture assistant at Applewood Estate for the Ruth Mott Foundation.

“It helps kids get good work experience and keeps kids off the streets and out of trouble,” says Byron, who hopes to own his own business someday. “It’s definitely a good program for Flint.”

Kristin Longley is director of communications for the Ruth Mott Foundation. Reprinted with permission.