Cooking up a career: Local chef whips up culinary dishes and creativity at T.aste of C.ulture Catering 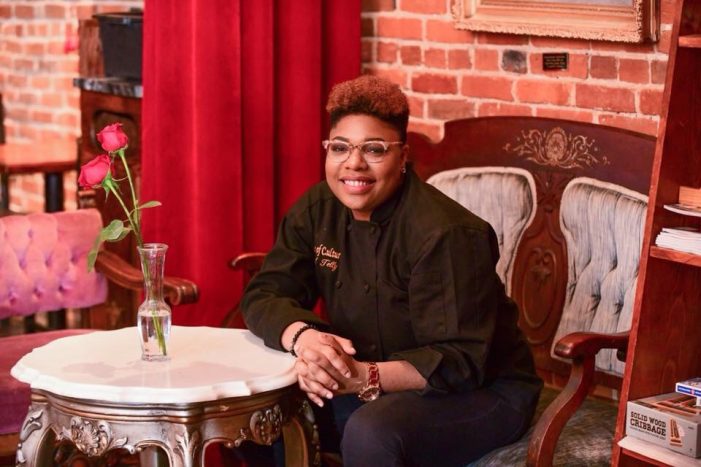 She is known for her “Soul Food Sundays” and “Wing Wednesdays,” especially the “vegan wings,” a novelty when it comes to diehard chicken-lovers.

For Talicia Campbell, trying out new things with her emerging business is already old hat. As the owner of T.aste of C.ulture Catering, the young entrepreneur is already pushing her talent in as many directions as she can, and she only opened shop in October 2015.

The 27-year-old started by selling dinners from her home and promoting herself via Facebook.

“The response was awesome,” Campbell says.

Her full-time job was as an operations agent for Southwest Airlines. With her days occupied, she couldn’t devote the time needed to grow a business, especially when opportunities were so numerous she couldn’t keep up. Campbell took a leap of faith and quit her job.

“Honestly, it has taken off more than I thought,” she says. “It’s exciting!”

Campbell had studied culinary arts at her high school and attended Grand Valley State University to learn hospitality and tourism management. She left after two years, transferring to Mott Community College for its culinary program.

After a brief stint at a job in a Georgia restaurant Campbell moved back home to Flint. Her break came in two doses: the Flint Small Business Initiative program that placed participants in a restaurant one day a week, buying liability insurance for them and helping with operations until December 2017, and the Flint Soup competition. She won $839 in funding through the small business pitch contest.

Seeing her path being forged, Campbell hired a professional advisor. Ebonie Gipson, who operates I’m Building Something Consulting, took Campbell on as her first client. Campbell established herself as an LLC in May 2017.

Currently based at Fresh Fish Café on Welsh Boulevard, the budding entrepreneur is in negotiations to open a commercial kitchen and restaurant on North Saginaw Street this month.

“People call me on days I’m not open to ask for things, like where they can get my vegan wings,” says Campbell. She offers personal chef services, as well, traveling to customers’ homes and even as far away as Louisiana and Tennessee.

Public appearances are a part of her repertoire. Campbell participated in TheHUB’s Savor the Flavor of Flint celebration in January, taking part in a live cooking demonstration.

“I made a honey garlic salmon with grilled pineapple and julienned zucchini and squash,” she says. “We offered it to the attendees down on the (exhibition) floor. It was a hit.”

Campbell loves to cook everything – including dishes that represent different cultures.

“I have a Creole menu, an American-Swiss menu, a Mexican menu, and more,” she says. “I like to play with different flavors. As a cook I am very versatile.”

Versatility and the ability to think broadly have enabled Campbell to do the kind of branching out entrepreneurs need to experience.

Part of Gipson’s consultation for clients like Campbell involves holding “vision board” parties that invite participants to write down and depict what they want out of their lives and careers.

“I’ve seen how it’s helped shape my life,” says Campbell. “People are more successful when they write down their visions. Statistically, you have a 33 percent increased chance that your dreams are going to happen if you write them down.”

Campbell leads vision board parties at local and out-of-town locations with a group of six friends. They call each other “the squad” and Campbell will even occasionally do the catering.

Campbell has an educational dimension to her business, too. She wants to invest in area’s youth and give back to her community.

“Home economics classes aren’t always taught at all the high schools, so I’d like to partner with schools and other youth programs in the city,” she says.

Campbell caters for YMCA Safe Places, an after-school program, and is looking for other initiatives to support.

Her sister, Gabrielle Davis, runs the nonprofit Dream League Music Mentoring, a nonprofit organization that provides music lessons for youth and coordinates music-oriented events. Campbell has an originally flavored snack on her menu, “The Dream Wing,” named for her sister’s organization. A portion of the proceeds of each order of the wings benefits Dream League Music Mentoring.

“I want to be able to purchase instruments for the growth of the program,” she says. “There’s so much I want to do.”

For more information about Campbell’s catering visit the Facebook page or call (810) 471-3933.

Cooking up a career: Local chef whips up culinary dishes and creativity at T.aste of C.ulture Catering added by Cindi Cook on 03/08/2018
View all posts by Cindi Cook →