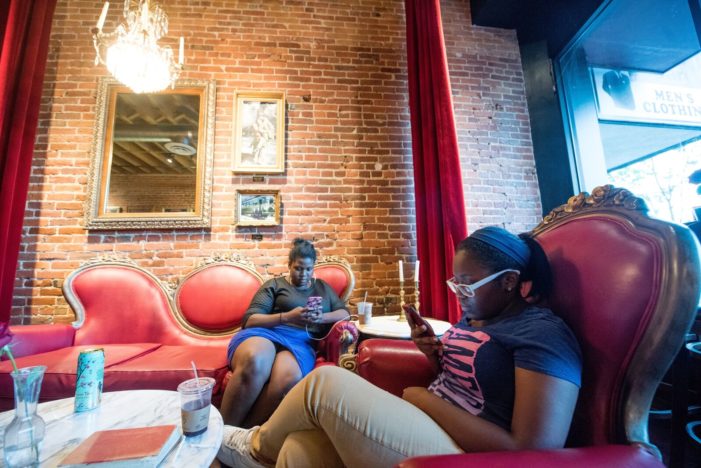 With a nod to its past and an eye on its future, Cafe’ Rhema is grounded in Flint’s recovery efforts.

Although it adorns itself in 1920s motif, the place has a modern mindset and mission to move Flint forward.

Recently celebrating a three-year anniversary, the popular spot for beverages, meals and cultural gatherings exemplifies the role of neighborhood businesses in re-energizing urban communities. Independently owned shops like Café Rhema have collectively added stability to Flint’s economic landscape while creating a welcoming space for the public.

“I was coming into Brown Sugar fairly regularly and was a member of the downtown community,” says Josh Spencer, Café Rhema’s owner.

Then operating under the name Brown Sugar, the café was at a crossroads as the owner pondered moving on to new ventures. Spencer, who headed a nearby marketing agency, brokered a deal and briefly ran the coffee shop under its old banner before re-opening as Café Rhema, 432 Saginaw St.

“My heart has been in seeing downtown Flint revitalized with all the businesses and successful restaurants,” says Spencer, 36. “I just wanted to be a part of that, really.”

With its Victorian-style, vintage furniture, crystal chandeliers and images of Flint’s founders in photos lining the walls Café Rhema has played a significant community role. The décor, music and staff attire add thematic layers to an establishment that draws students from University of Michigan-Flint, downtown-area professionals, and families visiting from throughout the city and suburbs. Along with other establishments, Spencer says his shop has helped a district with a faint pulse become more active as entrepreneurs like him join residents, planting stakes in the ground of storefront space and apartments.

Although the district is commonly viewed as a center of government and business activity, Spencer says downtown is developing less sterile, neighborhood traits.

“We are a downtown area in Flint, however, downtown has become quite a community of its own,” he says. “The downtown crowd is one that really believes in the city of Flint and the great potential we have. What we’ve seen is a group of people, business investors and youth, and adults, who want to come to the downtown area and see what it’s about.”

Describing the café as “family-friendly,” Spencer says it’s common for parents and children to stop in for waffles Saturday morning, then dip over to nearby Flint Farmers’ Market to shop and return to Rhema for lunch in the afternoon. There are also regularly scheduled live performances by local and regional artists of diverse genres, ranging in admission from $5 to $15. A special attraction was the Billboard-charting Christian rock band Sanctus Real, who jammed for about 50 people in the café’s overflow room.

Other Rhema-hosted activities include trivia night when guests win prizes for participating, and “Unashamed,” a Wednesday-afternoon prayer and spiritual reflection session, where visitors quietly introspect.

“I’m a Christian and I believe it was a plan God had for my life.” Spencer says. “What I didn’t see then was that Café Rhema was an outlet to do many of the things I wanted to do.”

“It’s a rarity, but I think it’s because we’ve developed such a home for the community,” he adds, “and it looks cool, and we have karaoke and events in the evening. People can go home and change and come back downtown for dinner and a show.”

Flint native Laquesha Anderson, 30, had just returned home from living in Muskegon, Mich. when she asked friends what was new in the community. Since being introduced to Café Rhema not long afterward she visits the shop two to three times a month.

Anderson might spend two hours enjoying board games with friends or occasionally sitting in on devotionals held at the café by local church groups.

“You can get food anywhere and you can get coffee anywhere,” she adds. “Good staff and good people are harder to find.”

Along with Café Rhema, The Good Beans Café, located nearby at 328 N. Grand Traverse St., has enriched Flint’s coffee culture. Open since 2000, Good Beans also hosts a regular calendar of events and activities from visual arts to comedy and concerts in its 50-seat Anteroom where performers can even record live.

On the near horizon for Café Rhema are a menu update including items made from single-origin coffees and Michigan roaster ingredients. Spencer calls it gratifying to be part of a resurgence in his hometown.

“We’ve become a staple in the community,” he says, “because everybody knows who we are and we’ve helped contribute to coffee culture, learning what great coffee is and trying to show what a great atmosphere feels like.”

For information and events scheduled at Café Rhema visit www.caferhema.com.