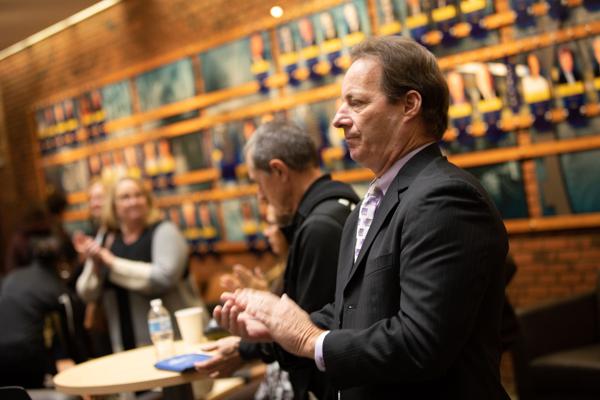 Soccer fans will soon be added to the numbers of residents and visitors who have a reason to enjoy Flint.

When the Michigan Bucks of the USL League Two relocates from Pontiac to its new home field at Kettering University’s Atwood Stadium next year, the city will gain a new sports team and new downtown-area attraction at the same time. Regarded as the most successful franchise in the former Premier Development League’s history, the soccer club will begin its next season in 2019, led by Dan Duggan and Costa Papista.

“I am very excited about this move and partnership with Costa,” says team owner Duggan. “We simply could not pass up this opportunity to move to Kettering University’s Atwood Stadium. Flint is a great sports town and it is only about 35 miles north from Pontiac.”

The Michigan Bucks will call Flint’s Atwood Stadium their home field beginning in 2019.

“This location allows our soccer club to grow its fan base, while continuing its relationship with our current fans in Oakland County,” says Duggan. “It also gives us the opportunity to expand our business and marketing footprint to encompass both Oakland County and Genesee County.”

The Bucks have won multiple regular-season titles throughout the franchise’s history, plus three North American competition titles, one as recently as 2016.

Papista says Atwood Stadium, and Flint will serve as the backdrop for his and Duggan’s goal “to create a great experience for our players, fans and sponsors of USL League Two soccer.”

The announcement of a professional sports attraction isn’t just welcome news to spectators who’ll enjoy the 2019 season, but to corporate and community leaders and Mayor Karen Weaver.

“This is another win for Flint, for our residents,” Weaver says. “This is a huge opportunity to introduce youth to a global sport and inspire the next generation of soccer legends. To have the most successful franchise in the history of USL League Two play right here, at Kettering University’s Atwood Stadium, it truly is an honor.

“Costa Papista’s substantial experience in successfully operating sports franchises and his commitment to promoting community vitality in Flint were instrumental in Kettering University’s decision to allow Atwood Stadium to serve as the team’s home field,” says McMahan. “This relationship adds a significant, family-friendly entertainment draw to Flint and has great potential to further build the economy of our community.”

Kettering University made significant renovations, including the installation of a new soccer field, football and lacrosse competition areas at Atwood, after buying the stadium five years ago.

A competition will be announced to let the community celebrate the Bucks’ arrival in Flint by renaming the franchise, say team officials.

Tim Herman, CEO of the Flint & Genesee Chamber of Commerce, and Mark Young, chairman of the Genesee County Board of Commissioners, both say the team’s move to Flint will benefit local business and tourism initiatives.

“This is great news not only for downtown Flint, but also for the region as it will increase the vibrancy and economic activity during the league’s season. More sports bring more fun, more vitality and opportunities to compete,” says Herman.

“Economic development in Genesee County is a lot more than just recruiting businesses to move here,” he says. “It is about creating a vibrant, nurturing environment that makes them want to be here. The acquisition of the Michigan Bucks soccer franchise is another great reason to be part of Genesee County!”

Champion soccer team’s move to Flint is expected to boost city spirit and vitality added by E.B. Allen on 10/31/2018
View all posts by E.B. Allen →