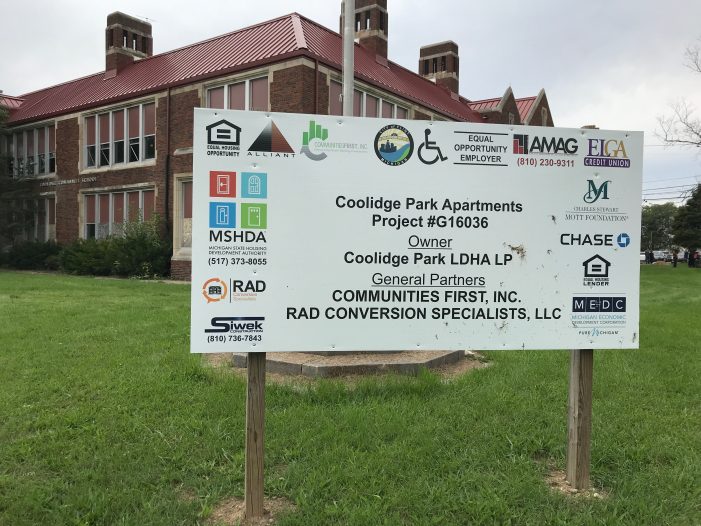 The old Calvin Coolidge Elementary School will be soon be renovated into Coolidge Park Apartments and a new four-story building.

The existing building, originally constructed in 1928, has been closed since 2011 due to high costs and low attendance. The renovation is set to cost $16.5 million and will include 54 apartments in total with 45 mixed-income affordable apartments and nine market rate units.

The property was purchased by local nonprofit Communities First, Inc. in 2015 and construction is now underway.

“This has been a long time coming,” says Essence Wilson, co-founder of Communities First, at the groundbreaking ceremony. “We have been working on this project for many years … We’ve had difficulties and troubles, but we are now here.”

Former students from Calvin Coolidge Elementary School, including Communities First co-founder Glenn Wilson, well as representatives from Glendale Hills Neighborhood Association, were at the groundbreaking to share their memories from attending the school and show their support for the renovation project.

Sue Goering, vice president of Glendale Hills Neighborhood Association, says Communities First. was in steady communication with them and attended several association meetings to make sure Glendale Hills was a part of developing the project.

“We know that as the city continues to develop economically it is going to draw more residence and they need safe, affordable housing, and that is what this project is providing,” says Mayor Dr. Karen Weaver. “Once complete this is going to create about 12 full time, permanent jobs with the average hourly wage of $21.25. These are good jobs.”

Founded in 2010 by Glenn and Essence Wilson, Communities First, Inc. has already developed Oak Street Apartments and Swayze Court Apartments located in downtown Flint. The mission of Communities First, Inc. is “to build healthy, vibrant communities through economic development, affordable housing and innovative programming.” That includes developing properties to create affordable housing as well as engaging communities through programs to aid in economic development, promoting environmental sustainability, and an improvement of the overall quality of life.

To learn more about Communities First, Inc. and its many events, such as the summer Movies Under the Stars series and the annual African American Film Series, follow it on Facebook or visit http://communitiesfirstinc.org/.