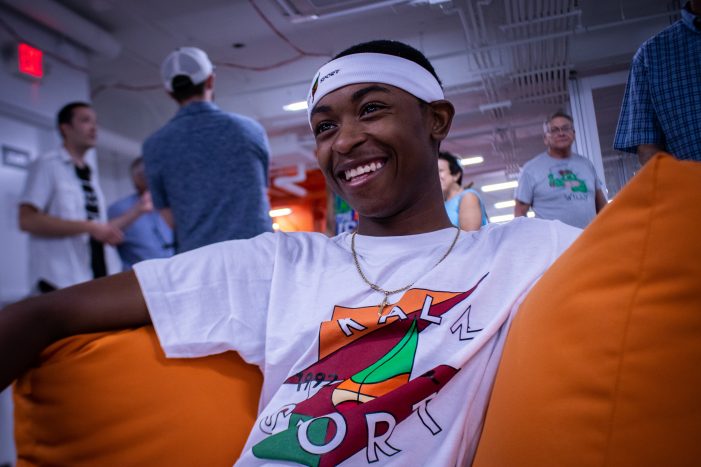 There was a time when Jemini Green cared a lot more about fitting in.

As a high school student he wanted affirmation for wearing the clothing styles and making the fashion choices most commonly accepted by his peers.

His personal transformation and embrace of his individuality led Jemini to a decision: He’d rather start trends than follow them. Combining a love of apparel with a concern about the many issues that affect his community and larger society, he launched Motive Clothing this year.

“I started modeling at the age of 16 and finding interest in fashion,” he says.

“I used to always worry about how I dressed. I used to be one of those people who was worried about the trends, what everybody else liked. In my junior year, I just wanted to boost my confidence and be comfortable in my own skin, dress how I always wanted to dress and put on the things I wanted to.

“Modeling kind of pushed me out there and forced me to be who I wanted to be.”

Today at 18, Jemini expresses his confidence in the form of designs that adorn t-shirts, coats and other items featured in Motive’s line. The recent Carman-Ainsworth graduate was inspired by the reaction he received while creating his new look when he was still in high school. From bleaching articles of clothing to adding strategically placed rips and holes, the imprint he created sparked the trickling of a customer base among wearers of urban apparel.

“People started seeing mine and they would say, ‘Oh, make me some!’” Jemini remembers. “I would do it for just a little extra cash.”

It was also during his junior year that Jemini’s modeling team, Poetry in Motion, held its first fashion show at Factory Two in downtown Flint.

“Minutes before the show started they came to me and said, ‘We don’t have a name for your line, to introduce it.’ Instantly, I said ‘Motive.’”

The name became the one with which he branded his embellished, customized clothing pieces, and later attached to a logo.

His first design was a white t-shirt bearing what he calls the Motive “classic” logo, followed by a black t-shirt with the same icon.

Experiences that affected him personally, like the loss of a sibling to suicide, and the death of his grandmother – who succumbed to breast cancer on her birthday last November – began influencing his creative visions.

“I felt like it would be dope to shine awareness on things like gun control, mass shootings and suicide awareness through clothing, something that I love,” he says.

Among his forthcoming apparel concepts will be a theme promoting awareness of autism.

Jemini’s early designs reflect what he describes as a “twist on the culture” associated with urban contemporary lifestyles.

A student at Mott Community College studying culinary arts to become a personal chef, he says he’ll continue to expand the Motive line, including designs that resemble 1980’s and 1990’s track suits and windbreakers “mixed with the new age, urban street wear” styles.

“I’m all about collaboration over competition,” says Jemini. “So for my peers to come to me and tell me they’re proud of me, I’m glad about that. I’m really all about making my city look good.”