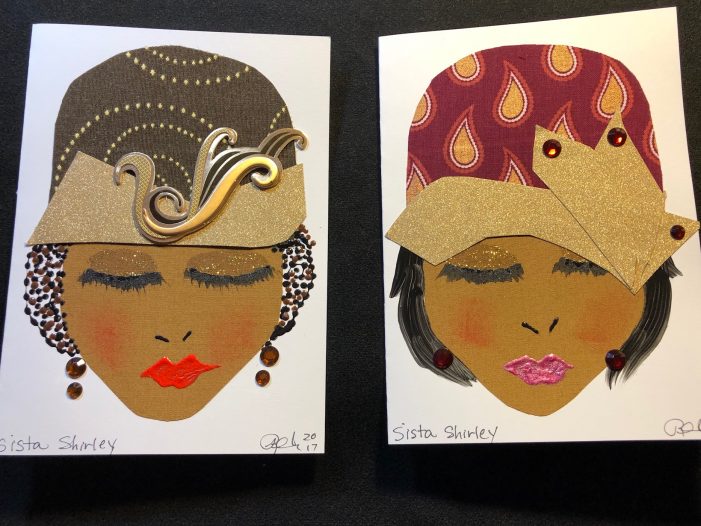 For most people, a greeting card is a cheap piece of cardboard less important than the message scrawled in it – something you hang onto until you don’t feel guilty throwing it away.

Rhonda Willingham has changed that by creating one-of-a-kind works of art for your personal messages with her card company Sista Girl.

Willingham’s journey into the world of designing greeting cards began when she was in grad school at Central Michigan University where she was working on a thesis that involved talking to successful black business women.

She found them to be very respectful and helpful and wanted to thank them for their time and aid, especially since some were busy executives in Fortune 500 companies.

Like most of us, Willingham turned to what our mothers drilled into our heads since childhood … send a card to say thank you. The problem was she couldn’t find any she felt really expressed how she wanted to thank these successful women.

For her the answer seemed obvious – make the cards she needed.

“I based them off of what I wasn’t seeing in the main stores,” she says.

Being the First Lady of Charity United Methodist Church in Flint, where her husband, Brian, is pastor, inspiration is never far from her. Her mother, however, was her main muse.

Appropriate for sale in both the Vehicle City and Motor City, many of the 5×7, three-dimensional cards are embellished with the faces of black women made from leather, suede, and other materials from GM car interiors. They come with a matching envelope, are packaged in a crystal clear sleeve and are blank inside. Each card is signed by Willingham. 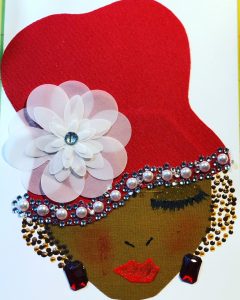 Many of the cards are put together by special needs people. Local charities helped make the connections, and Willingham says she enjoys providing a sense of purpose and dignity for those workers.

“It is important to give value,” she says.

While her husband’s congregation has purchased the cards, they are hardly the only people interested. She also has customers in Flint and Detroit.

Many of the sales have been at trade shows, such as quilting or crafting events. These more specified art shows help her stand out in a crowd and, since people sometimes buy her cards just to frame and keep, she is hardly out of place.

The cards also been sold in other cities like Chicago and have made their way across the sea as part of Sista Soldier. That organization sends hair care products to female soldiers of color who may find the parts of the world where they are serving problematic for their hair. When these female soldiers open the Sista Soldier boxes, one of Willingham’s cards is the first things they see.

Willingham also designed the logo, which she says is saved for Harvard’s women’s studies program along with letters written back to her and Sista Soldier.

Celebrities have also taken notice of her cards. Vivica A. Fox used them in swag bags, and Oprah Winfrey and Patti Labelle have given them out.

Both men and women have bought and enjoyed Willingham’s her cards, but that is not where she stopped. Recently, she entered the world of adult coloring books.

Part of the idea came from her day job as a therapist where she became well- associated with the therapeutic nature of coloring. Everyone from the elderly down to school kids enjoy the book.

“One woman (in her late 80s) said, ‘the coloring book was better than the nerve pills,'” Willingham says.

Sista Girl has been embraced by a wide range of people across races and creeds.

“I was creating something I didn’t see for people of color, but it has become a bigger thing,” says Willingham.

Sista Girl changes the face of greeting cards, makes them from GM vehicle interiors added by M Lapham on 03/13/2018
View all posts by M Lapham →